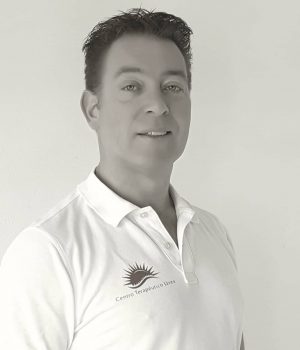 Paul finished his four year Bachelor of Science degree in 1996 in Nijmegen, The Netherlands.
After several locum jobs, he worked in a private practice for Sports Physiotherapy for five years, before leaving for the Caribbean in 2003.
On Aruba, Dutch Antilles, he worked in the only hospital on the island. As a member of the Physiotherapy and Rehabilitation team of 5 physiotherapists, 2 occupational therapists, 2 social workers, and a Physiatrist, he worked on the Orthopedic, Neurologic, Pediatric wards, and on the ICU and CCU.
Whilst working in the hospital for 4 years, Paul was fortunate to be able to do many courses, organised by the Rehabilitation department, such as Neurological Rehabilitation, Prosthetics, Shoulder Rehabilitation, Pediatric Physiotherapy for 0-2 year olds, and many more.
After just one year of owning his own clinic on the neighboring island of Bonaire, due to family circumstances, Paul moved to Spain. In Nerja, Andalucia, Paul worked in a private practice for Physiotherapy for nearly 2 years.
Forced by the economical crisis to leave Spain, it was back to the Netherlands, and a job as a physiotherapist on the orthopedic ward in the renowned hospital, St. Maartenskliniek.
But the better weather and different life style of Spain made for another move quickly. From 2011 to 2015 Paul worked in Moraira, Costa Blanca in a clinic for rehabilitation and physiotherapy.
Then, since it was decided he was definitely staying this time, Paul bought the clinic on the Plaza in Javea, Centro Terapéutico Javea.
In the same year he started the 4 year Master study of Osteopathy, to broaden his knowledge and keep developing as a therapist.
At the moment of writing, Paul is close to finishing his studies,  with just a thesis to be done.
For a detailed C.V. click here.

Javea Acupuncture & Chinese Medicine centre provides genuine Acupuncture and Herbal Medicine provided by a highly qualified, Australian trained, registered General Practitioner of Chinese Medicine. We are an integrative health care centre and are happy to support you in whatever way we can, in harmony with your western medical practitioners.

Your treatment is important. All appointments are designed so you receive quality one-on-one time with your practitioner. We see one patient at a time. Your treatment won’t be rushed since we allow 45 min.

We take the time to listen to what you need and put together a tailor-made treatment plan according to Traditional Chinese Medicine principles and modern western medicine perspectives.

Disciplines practiced include Acupuncture, Herbal Medicine, Massage, cupping, Shi Liao (Clinical Nutrition)and  Moxibustion. Your treatment can include a combination of these therapies.

Contact one of our specialists today to find out more or to book an appointment.